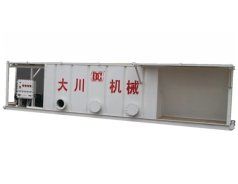 Mud tank is an important part in the solid control system.

Mud tank is a sizable storage container, typically with an open top. In the past, people called it a mud pit because it used to be just a pit dug out of the earth. It’s used to hold drilling mud.

Mud tanks are constructed from welded-up steel plates and tubes. The bottom of the tanks can either be square or cone-shaped. A tank can have several compartments.

3. In general, chemical tank's roof is mounted with shear pump. Chemical tanks are used for adding chemicals into drilling fluid.

The role of mud tanks in solids control

The number of mud tanks required by a drilling rig depends on the depth of the well, as well as the drilling mud requirements. Typically, the shaker, vacuum degasser and desander are installed on the same mud tank as the first tank in the field, while the desilter and centrifuge are installed on the second tank.

DC Machinery supplies good quality drilling mud tank with best price, welcome to contact us and get the best solution for your work!