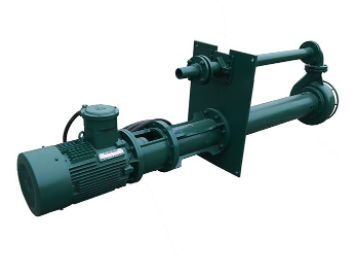 A submersible slurry pump is a kind of centrifugal pump from the principle of physics. Conceptually, it refers to a machine that adds energy to solid and liquid mixed media through the effect of centrifugal force (the rotation of the pump's impeller) and converts electrical energy into a device for the kinetic and potential energy of a medium. The name of the submersible slurry pump is a centrifugal pump that is distinguished from the point of view of the conveying medium.

The connection between the centrifugal pump and the submersible slurry pump

How does the Centrifugal pump work？

The main working parts of a centrifugal pump are the impeller and the casing. The impeller equipment inside the casing is located on the shaft and connects with the prime mover to form a whole. When the prime mover drives the impeller to rotate, the blades in the impeller force the fluid to rotate, that is, the blade does work on the fluid along its direction of movement, and then forces the pressure potential energy and kinetic energy of the fluid to be added. At the same time, under the effect of inertial force, the fluid flows from the center to the margin of the impeller, flows out of the impeller at a high speed, enters the extrusion chamber, and is discharged through the dispersion pipe. This process is called the pressure water process. Together, because the fluid in the center of the impeller flows to the margin, a low-pressure region is formed in the center of the impeller. When it has a satisfactory vacuum, the fluid enters the impeller through the suction chamber under the effect of the pressure at the suction end (usually atmospheric pressure). This process is called the Water absorption process. Because the impeller rotates in succession, the fluid is continuously discharged and sucked in, which constitutes a continuous operation.

The working process of centrifugal pumps (including submersible slurry pumps) is actually a process of energy transfer and conversion. It transfers the mechanical energy of the motor at high speed through the blades of the pump and converts it into pressure energy and kinetic energy of the pumped fluid.

These pumps are considered multi-level centrifugal pumps operating in the vertical position. Fluids that are augmented by impeller will drop off their kinetic energy in the diffuser and here the conversion of kinetic energy to pressure happens. This is the fundamental principle of both mixed flow and radial pumps. Whereas in the hydraulic submersible pumps, the motor is of hydraulic type other than the electric ones and in the case of closed-cycle the power liquid is kept isolated from the generated liquid. And in the open cycle, there will be a mixing of the generated fluid and the power fluid with that of surface isolation. 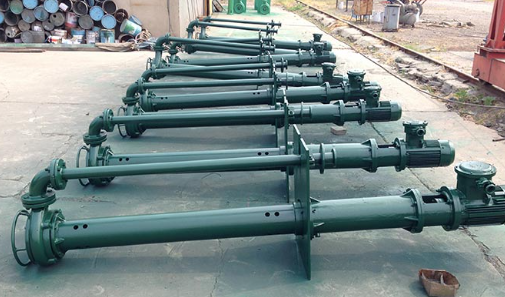 The shaft of the pump is connected either to the protector or gas separator through mechanical coupling at the pump bottom side. The liquid moves into the pump via the ingesting screen and is then elevated by the pump levels. The other components consist of bushings that are located all across the shaft length thus offering radial assistance to the shaft. In most cases, a thrust bearing handles a portion of the axial forces that arise in the pump, but these forces are maximumly captivated through the protector’s thrust bearing. There even exist various types of screw kind submersible pumps, where there will be a steel screw that operates as a functioning component. This screw permits the pump to operate water even in extreme impurity conditions.

How to extend the service life of the submersible slurry pump？

To deal with this problem, the debris and long fibers sucked by the submersible slurry pump must be cut and discharged, and then the sand and water will be driven out together. This not only prolongs the service life of the submersible slurry pump but also speeds up municipal engineering. Construction speed creates the conditions. There is also a stir-type electric pump, which works slightly differently from cutting. It is equipped with a homogenizing tissue attachment. When the water is pumped to the bottom layer, because the underwater sediment or sediment has reached a certain concentration ratio and is not uniform, the thick sand will be sucked and stuck without draining the water. This is the first You need to mix them evenly and dilute them into thin sand so that it won't damage the electric pump easily.

We are a submersible slurry pump supplier，please feel free to contact us if you need them.

Previous: What Is The Operating Point Of Centrifugal Slurry Pumps?